It all started in 1965 in Stockholm. Rolf Näslund founds FocusNeo with the ambition to help companies to become more visible to their surroundings by means of the manufacture and maintenance of illuminated signs.The company is located on Rådmansgatan in Stockholm and its first customer is Endres Livsmedel at Odengatan 54. In 1966 the business grows to four employees and the company moves to new premises on Vikingagatan in Stockholm.

In 1971 Atlas buys out Neon AB, and as early as 1972 FocusNeo acquires the business of Philips Neon, founded in 1924 and one of the oldest and largest companies within the sign-making industry. Through the acquisition, access is gained to the know-how and licensed production of Philips Reflekta lights and to world-class product development. As a result of the acquisition, FocusNeo becomes the market’s largest and leading player in illuminated advertising, a position that we still hold today. FocusNeo moves into Philips’ premises in Hägersten in Stockholm.

In 1973, FocusNeo wins a contract to supply 600 signs to Skandinaviska Enskilda Banken, the present SEB, which is the beginning of an important and close co-operation, which is still ongoing now, more than 40 years later.

In 1975 a collaboration is initiated with the German Maas & Roos AG.

The German factory remains the main supplier to FocusNeo today, more than 40 years later. As orders increase, e.g. from PK-banken, Föreningsbanken and Arla, FocusNeo opens branches in Gothenburg and Malmö during the second half of the 1970s. In 1978, the first electronic sign – a time and temperature sign – is supplied to TryggHansas’ new head office at Kungsholmen in Stockholm.

The picture shows Rolf Näslund in front of the main office on Instrumentvägen in Hägersten.

From the total domination of neon signs on the city landscape during the 50’s and 60’s, the trend reverses, and in the 70’s and 80’s cheap light boxes with fluorescent lighting start to become more and more visible. For FocusNeo, the 80s start with the acquisition of Neontjänst AB in Gothenburg, and in 1983 one of the more spectacular pieces of work in Stockholm is produced, when FocusNeo is commissioned to renovate the NK Clock.

In 1986, a global agreement is signed between SAAB Scania and FocusNeo for the supply of signage to both retailers and offices around the world. In the same year FocusNeo buys SydNeon and grows to 30 employees in Malmö. Two years later, FocusNeo AS opens its office in Oslo, its first office abroad. During the 80s, several major re-profiling projects are implemented, for example Skanska, BPA, Nordbanken and ABB.

In 1988 the neon lighting production relocates from Stockholm to Jönköping following an acquisition by Astralskylt. 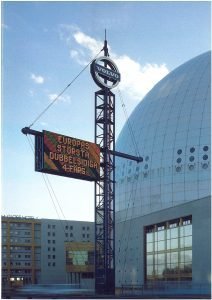 The end of the 1990s sees a break-through in LEDs as a source of lighting, and in 1998 LPFLEX is introduced into Scandinavia. At about the same time, Stockholm City architect Per Kallstenius attempts to recreate the grand ornate avenues of Stockholm with fresh plantations of trees, cycle lanes and less motoring. Signs in the urban environment are also affected when light boxes are more or less prohibited in favour of stand-alone profile lettering.

During the 90’s, FocusNeo is tasked with the implementation of re-profilings of, inter alia, Sparbanken, Åhléns, Skandia and when SE-Banken becomes SEB. Focus implements a number of major projects with electronic signs for the Rasunda football stadium, the Ullevi stadium, the Scandinavium arena, and others.

In 1998, the Sign of the Year prize is awarded in Stockholm for the first time, and FocusNeo is the winner with Café Milano on Kungsträdgårdsgatan. The following year FocusNeo wins the same prize with Falck’s large, red LED sign in Västberga. 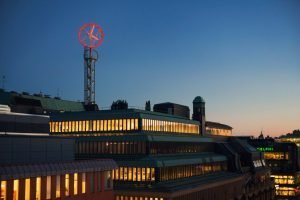 Founder Rolf Näslund steps down as CEO in 2000 and the company continues under the direction of his sons Michael and Magnus.

The technical development continues and an ever-growing number of signs are manufactured using LED as light source. FocusNeo is commissioned to renovate the NK Clock for the second time, and this time the neon is removed and replaced with LED technology. Other major assignments carried out during the 2000s include re-profilings of E-ON, Lantmännen and DHL. 2006 marks the beginning of a more than 10-year-long collaboration with PostNord, as thousands of signs are replaced with new logos over the years. We also begin our partnerships with the restaurant chains McDonald’s and Burger King.

In 2005, a major sustainability drive is initiated within FocusNeo, and the company is awarded a diploma by the Swedish Environmental Base for the first time.This environment diploma has since been renewed every year.

In 2009, Focus Electronic AB is created to manage the sale of electronic signs, LED displays and traffic systems. In the same year, the manufacture of neon lights in Jönköping is discontinued owing to a decreasing demand for traditional neon tubing. 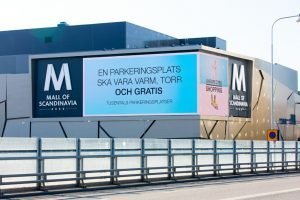 The increasing number of Nordic projects leads to FocusNeo opening an office in Finland 2013. In 2012, one of the most extensive and time-constrained projects in FocusNeo’s history is carried out, when retail chain Dressmann changes its logo and over 1,300 signs are replaced in 370 stores in seven countries over a period of 12 days.

Today, more than 50 years after its founding, FocusNeo is the largest supplier of signage and visual communications in the Nordic countries. We are still a family-owned company and driven by a far-sighted approach and sustainability, from an economic as well as an environmental perspective. We aim to be a customer-focused company that drives development and reflects quality in everything we do, down to the smallest detail. This is the promise we have made, and we are convinced that we can live up to it. We want to be better both for you and for your brand.

SEE HOW WE CAN HELP YOU